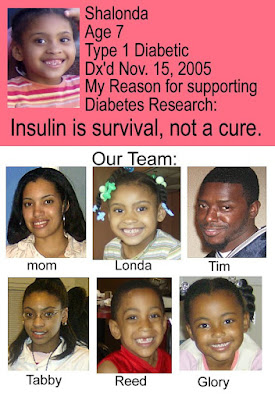 The walk is this Sunday. We've received some donations, but we didn't get as much as I had hoped. I'll blame it on the failing economy.

We are doing this for Shalonda and all of the other Diabetic children out there. So I told the kids that as long as we do our best and go out there any show our support, we' will still have made a great contribution.

Everyone seems pretty excited about our first year participating in the walk, except for my oldest daughter. Miss Twelve-year-old herself, says she doesn't want to walk that far and she hates walking. She's such a sour puss. I'm making her go anyway. Especially since trying to talk to her about supporting her sister meant nothing to her. I'm telling you guys, when these children get into their pre-teen years, it's like a whole new ball game. They have all these opinions and things to say. They get self-absorbed and everything becomes about them and their friends.

Anyway, pictures will be posted after the walk. It's supposed be a fun family event. There's even a Halloween costume contest afterwards.

Check out our donation page!