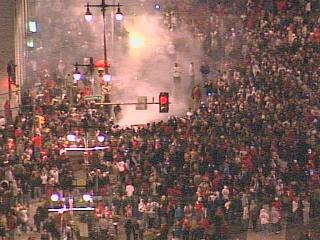 Why, oh why can't the citizens of our city celebrate without acting completely insane? We won the World Series and you'd think it would be a time to lift the city and praise. Instead, last night people rioted and destroyed the city. Doing everything from having fire riots, to breaking store windows, almost knocking over statues, looting, dumping over the metal trashcans in center city, turning over the big ceramic pots, trying to turn over a school bus, throwing glass bottles at police officers, tearing up street signs and spray painting them. I'm surprised that only two police officers were hurt. This is supposed to be a good thing, so why are people breaking things and destroying the city? You're supposed to break things when you're angry, not when your happy. Get it together people. This is costing the city money. Businesses can't open because they have to clean their stores and get the windows fixed. This is ridiculous.

Here's a photo of the fire. It doesn't look too bad, but keep in mind that this in the middle of a city street, not out in a yard or a field somewhere. 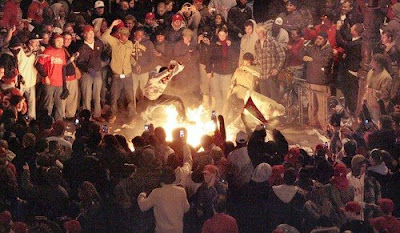 Here's a video of some people on Broad Street celebrating.

Thumbs down to those Phillies Phans that got pissy drunk and acted like fools.