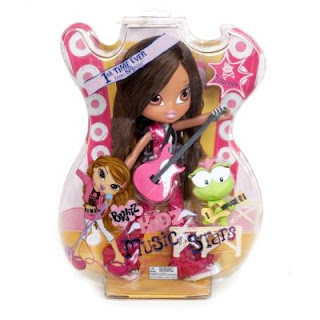 I tried my hardest to catch these dollies on sale this year. I planned to buy four. One for each of the girls. But they were selling out like crazy. My daughters just love Brat dolls. I don't know why. They have big heads, they break much easier than Barbie and they seriously overdue it on make-up. 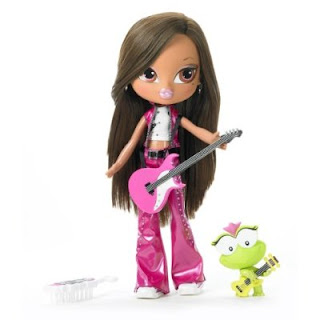 it is much more appropriate than others I have seen on this brand of doll.
So anyway, as I searched the net for the new Bratz Big Kidz Music Stars,
I could not find Sasha anywhere. I found the Bratz Big Kidz Snap-On Doll Sasha (who's skirt is way too short),
but I could not find the Music Stars doll. I checked everywhere I could think of, (in the US) and found nothing. However, while searching the net I found that many stores in the UK had this doll. Toys R Us in the US did not have it in stores or on the net, but Toys R Us' UK website had the doll. I would really like to know how they go about choosing which country to sell which dolls and why Sasha, one of the main four Bratz in not being sold here in the US. I wanted this doll specifically for my ethnically challenged, almost step-daughter. She's cambodian and black, but she always talks about white people. All the time. She's like white people this and white people that, and my hair looks like white people hair if I wear it like this. She even told us that her mom looks white sometimes, which is absolutely not true. She's asked me not to braid my daughter's hair and to leave it out. I try talking to her about this.
It's crazy. You're supposed to teach your children to be proud of who they are and to embrace their culture. Whether you're black, white, latina or whatever. We're all just people and we should teach our children that they are beautiful no matter what. No black child should want to be white, no white child should try to be black, no mixed child should try to choose between one race. Just be who you are and be proud. This is what I teach my children.
So anyway, I was going to give her Jade since Sasha wasn't available, but I didn't want to seem offensive. Like I was just giving her Jade because Jade is Asian. I'm ready to just nix the whole idea, grab Yasmin for my 7-year and call it a day.