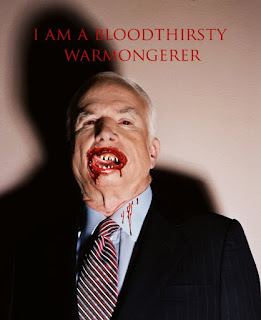 Jill Greenberg, a photographer who has worked for prominent magazine's such as TIme & Vibe, was hired to shoot some photos of John McCain. The proud Democrat did a photo shoot of the Presidential Nominee for The Atlantic Monthly's October issue. During the shoot she also took a few images for herself which she later manipulated.
The one to the right is a little scary, but they weren't all that extreme.
As it turns out this isn't the first time she's used her art form to express her political views. Greenberg has also done anti-Bush photos. I give her kudos for creative expression. She's very talented, but this was a little unprofessinal. She could have at least touched up the cover image for the magazine.
The Atlantic says they will not pay the photographer and plan to take further action because she violated the terms of their agreement. Greenberg has stated that perhaps the Atlantic was irresponsible for hiring her to do the shoot to begin with.
Check out Greenberg's site: http://manipulator.com/