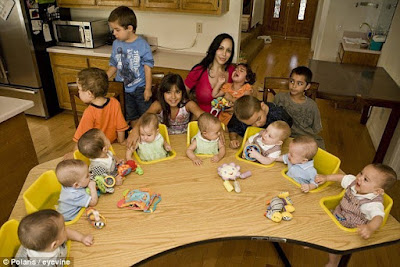 Nadya Suleman visited Oprah for the second time around and this time it was to ask for financial help to keep herself and her fourteen children off of the street. Nadya insisted to Oprah that she was both "financially destitute" and "emotionally depleted."

Oprah arranged for Nadya to meet with Suze Orman to help with her financial crisis. Although Orman seemed to have been reluctant to work with Nadya at first, she did step in and help the single mother of fourteen. Orman probably gave Nadya the best advice there could ever possibly be; to pray and let go of her pride. She told Nadya to stop refusing to get an agent. She has to support those children. Nadya was very much concerned with how people would depict her if she hired an agent or accepted government funded help. She even said she thought people would hate her. Suze's response was; "Everybody thinks you’re crazy for having eight kids. You know it"

After that, Orman pretty much told the single mama to forget what people are or will say, and do what she has to do for those children. Suleman had Nadya get rid of all her nannies, except one. She had her sell things in her house that she didn't need. Nadya chose to do a yard sale and made $1500.00. She then took a celebrity bartending gig which earned her $1000. in two hours! Nadya hired a literary agent. Which I think is a great idea. I would definitely buy her book.

Another interesting point in the interview was when Nadya bashed herself, calling her past actions stupid. Orman pointed out,

"This isn't about you putting yourself down. This is your day in front of the world to go to the deepest part in yourself, to be honest with why, what and now where do we go? But not to condemn yourself."

This perhaps led to the most shocking parts of the interview. Nadya reveals that she felt something was missing from her life. She was barely making it with the six children she already had. Still, this didn't stop her from trying for more, because she was seeking an unconditional love that only children can give. Nadya admitted to Oprah that she was a "baby addict." She compared it to a drug addiction and told Winfrey,

"I think I could have been self-medicating with children."

Suleman even admits that when she couldn't afford to cover the in vitro with her savings, she borrowed money from friends to fund the procedure.

There were parts of the interview that, in my opinion were a little negative. Like, when Oprah and Orman drilled Nadya about plastic surgery and the porn industry. Those conversations, in my opinion, could have been left out. Also, the constant drilling to get Nadya to admit that she regrets having the octuplets, was not cool. Nadya never says that she regrets any of her children. She does say that if she new then, what she knows now, that she would have made better choices. That's a very normal and human thing to say. I admit it as well. I don't regret any my children. I love them dearly. However, I became a mom at the age of fifteen, and if I could go back and make better choices, I would. Who wouldn't? Overall, it was a great interview with lots of self revelations on Nadya's part.