Going through his Phone 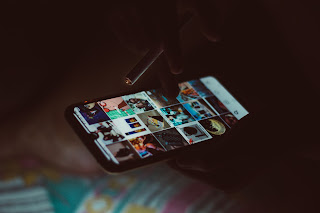 He left his phone.

There it is, sitting on the kitchen counter, the night stand or the bathroom sink. You've been questioning so many things lately and all of your answers are right there in that little device. What should you do? My suggestion is wait for him to come back and give him his phone. It most likely has a passcode on it. Trying it too many times will lock the phone and he'll know you were trying to snoop. But, what if there is no passcode? Should you go through his phone? I am going to say no. It is not a good idea to go snooping through your man's phone. Before you do it you should consider the following:

1. Snooping through his phone is an invasion of his privacy. Every individual deserves some level of privacy. Even when they are in a relationship. I'm pretty sure you have messages in your phone to family members or friends that you wouldn't want him to read. Not because you're cheating, but because you're talking shit or the other person is sharing something private with you.

3. If something is going on you will find out eventually. "Everything done in darkness will come to light." Trust and believe that if he is cheating or doing you wrong it will catch up to him.

4. This could be a self-esteem issue. Jealousy can lead to acting impulsively based on suspicion. Why are you jealous? This behavior is toxic and a lot of times it's a sign that you have low self-esteem.

6. You might find something. My mother always said, "Go looking for something and you just might find it." What happens if you find what you're looking for? Are you prepared to deal with that emotionally? How will you confront him?

7. You wouldn't want him to do it to you. Let's be real, as women, we do a lot of shit to men that we would not want them to do to us. I'm saying this as a woman who paid to put spyware on her husband's phone without his knowledge. I was able to see all texts, listen to voicemail and track his location with a gps. I would be livid if someone did that to me. Before you snoop through your man's phone, consider how you would feel if he did it to you.

Now, if you've read all that, and you still feel like you should snoop through his phone, I suggest you start with his CashApp. Check his CashApp to see if he's sending money to any other females. Then check his Instagram. First check his search feed to see who he's been looking up. Then, get right into his DMs and see who he's chatting with and what he is saying. Next, check his call log and text messages. Have your phone out to take pictures of the screens that you need for future reference. Make sure you close any tabs that you open, don't close any that he left open, and do not touch his notifications.