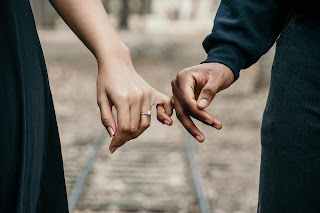 I feel compelled to fill you in on what happened to change me as a person and stop me from writing for so long.  It has been a long journey and I think you will understand me more if I explain.
Let me tell you about my marriage...
I met Ex long before we got married.  We married in 2011 in a very rushed ceremony while he was on house arrest fighting a case. (He was later aquitted of all charges).
You will never hear me say that I did not love my ex-husband. I loved that man. From the moment I met him, I felt like no one else on the planet understood me the way he did. The night we met, we sat on bar stools next to each other and talked for an hour and a half. We talked like we had been friends for years. We talked about life and family, about current events and politics and about music and movies. I wondered why I had not met him sooner. I was 22. Now, here I was, at age 30, feeling doubt in my heart while standing at the alter holding his hands.
The doubt was not from me thinking that he didn't care about me, or that he would cheat on me. One thing I knew for sure was that this man cared about me. One day, we were in the store and he was angry because I wouldn't tell him which guy had made a pass at me. That day, Mr. Torres told me that our relationship wouldn't work, because Ex loved me too much. I didn't know if that was true, but I knew he would always protect me.
Still, the doubt came from certain incidents that I couldn't let go of.  Like, when we went to the bar one night and he walked in before me.  He passed a table where L was sitting.  I went in the bar after him and walked past the same table. L spoke to me.  Ex was pissed!  He said, "That nigga waited until I passed him and my back was to him to speak to you."  And I'm like, "So what."  I truly didn't get it, but apparently there was some form of disrespect going on towards Ex, because L spoke to me after Ex had passed the table.  It still seems stupid to me, because what Ex didn't know, is that L wasn't some strange man speaking to his woman when he turned his back. L and I went to high school together.  Ex could have just discussed this with me instead of blowing up.  But he chose to blow-up instead.  We didn't stay long.  We walked back to my house, which was a half a block from the bar.  We argued when we got inside.  We were in the bathroom.  Both of us were yelling when he reached out and tried to smack me!  I backed up and he barely made contact with my skin, but I fell into the radiator.  I yelled out that he'd hit me.  I was being extra dramatic but him lashing out at me, hurt just like a real full-handed, caught by surprise slap across the face!
Now, I know some people may think of this as a defining moment.  A moment in which I should have realized that the relationship was not going to work, or that it was on the verge of becoming abusive.  This was not that.  Even though he tried to smack me pretty good, and we were arguing over something that was completely out of my control, it was not that bad.  Ex was a good person.  He treated me better than anyone else.  He would protect me from anyone and anything.
The problem was, that Ex could not protect me from himself.  I didn't know that then...
Related:
Ex ...(P1.2)
Ex ...(P1.3)