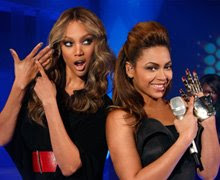 On Wednesday, Nov. 26th, Beyonce visited the Tyra show. If you missed it, you missed one great hour of television! There were so many moments in the show that touched me.
One of my favorite moments was when Tyra introduced a girl that had been diagnosed with MS. When she was first diagnosed she couldn't even walk. She had to start all over. Beyonce made this young lady's dream come true when she walked out on stage to meet her. See the video, it was so touching:
My favorite Tyra moments were the Jay-Z-Boy Chair and the secret. As a belated wedding gift, Tyra gave Beyonce a card board Jay-Z-Boy Chair. As the two ladies were about to break for commercial they each stood on one side of the card board Jay-Z and Beyonce playfully told Tyra not to sit too close to her man, it was so funny.

The secret, is still a secret. Tyra told Beyonce she was going to tell her a secret that she has been keeping quiet, and she did just that. She left the audience and us at home, wondering what she was whispering in Beyonce's ear. She never told us! What I got from it, is that Tyra is not single. She's not married, but she is seeing someone.

A visit from Beyonce wouldn't be right without a great performance and Beyonce did her thang performing "If I Were a Boy" and "Single Ladies." Beyonce dropped tears as she sang "If I Were a Boy." It was an awesome ending to a very good show. I was left feeling like Beyonce is just one of the girls and I had been hanging out with her and Tyra for an hour.

You have to look it up on YouTube, it was sooooo good.

Also, Tyra will be featured in Ebony Magazine's December 2008 issue. 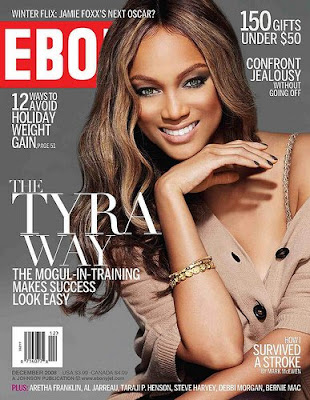