February 06, 2021
I literally had to grieve my divorce.  The stages of grief are denial, anger, bargaining, letting go and acceptance. I have gone through each one of these stages. I had to remove someone from my life that had been part of it for sixteen years. I met him when I was 22 and my divorce was finalized when I was 38. The relationship had ended years before the divorce, but it took me a long time to accept it. I was gone mentally, long before I had physically picked up my things and drove off. I was hurt. I was sad. I was angry. I couldn’t understand how HE could do the things he did to me. The one person who was supposed to love me unconditionally broke me down bit-by-bit until I didn’t even understand why I was living. I didn’t understand why I was suffering. I didn’t understand why God put me in that place. I was angry with God. I felt myself breaking down and it was getting hard to pretend that everything was normal. I hated going home. I worked late and went into the office early whenever I could. I tried not to get too close to co-workers or befriend anyone. It was always awkward when they asked me to hang out and I couldn't. I was not allowed to hang out. I posted pictures of smiling faces and family outings that made it look like we were a happy, functional family. I was careful not to get certain parts of the house in the photos taken at home. I smiled in pictures of myself and my Ex. He helped keep up this facade by posting long messages on his Facebook about the love his life and how he adores me. I don't even think we liked each other at this point. It was all so fake. My life was smoke and mirrors.

By the time I left my husband, we all had trauma. One of my daughters had tried to commit suicide the year before. Another started cutting herself the summer that I left. I picked up and took my three children with nowhere to live. We stayed at my uncle's two-bedroom house with him and his daughter. We didn't all have a place to sleep, so my son spent a lot of time in Coatesville with his grandma on his dad's side. My youngest spent a lot of time at my aunt's house in Wynnefield. They were all teenagers at this point and the damage of the last few years had left them between feeling sorry for me and being angry with me.
We all had trust issues and my children definitely didn't trust any new man coming into our lives. Men were all wolves in sheep's clothing. We were all protective. Divorce after a terrible marriage leaves your expectations of new relationships tainted. I needed to take it slow. However, when it came to dating men in my age group, it seemed they were all looking to settle down quickly. I would hear things like, "We're almost 40," and "I've never been married. I want to settle down." I was hesitant, and I questioned my own judgement. What kind of woman doesn't want to be married? I watch Hallmark movies. Everyone is looking for love.  But I was looking for something different. I was looking to rebuild my life and my relationship with my children. Could I do that while being in a relationship with someone new? The only way to know is to try it.
The same year my divorce was finalized I tried a new relationship. (My divorce took two+ years).  For the first year of the new relationship things moved quick. Too quick. A lot of issues came up with my children and I felt like my boundaries were being pushed. Then he moved an hour away and it turned into some sort of on again, off again thing. We couldn't work out our differences. I detached myself. I had to be honest with him.  My focus was on my career and my children. I was already a wife and I wasn't ready to be that again.
It is completely okay to take as long as you need to heal and ensure your divorce recovery. Get to know yourself again. Learn what you like and what you're willing to accept. Set boundaries and stick to them. Give yourself time. 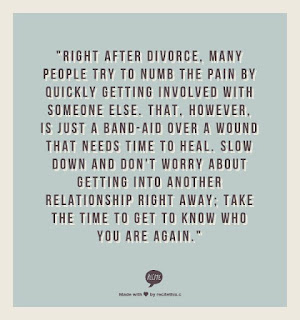