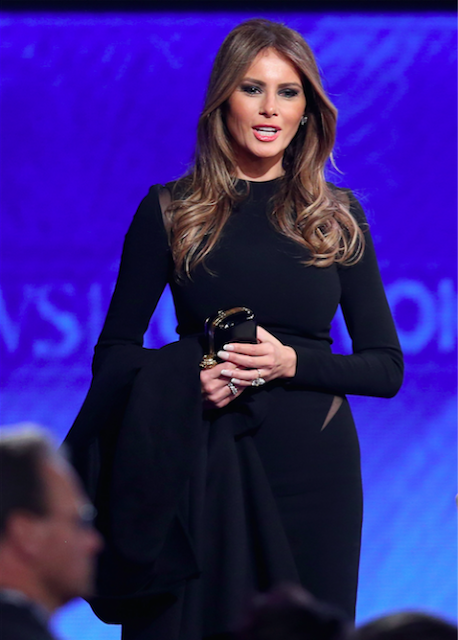 I am not sure why they are doing this.  I honestly think its kind of stupid.

This is how I see it:

A Yugoslavia girl who had a modest upbringing lands an international modeling contract at the age of 18 and builds a successful modeling career that lands her in New York City by the age of 26 attending affairs with New York's elite.  She then meets her future husband at age 28 and gets married at 35. She becomes a mother at age 36, with enough excitement under her belt, and money in her accounts to settle into motherhood quite nicely.  Her son will have the best education and live in the most afluent neighborhoods.  Then, on top of having an already fabulous life, she is soon to make history as the only foreign born First Lady of the USA. I think that's pretty damn awesome!  I am not about to judge this woman based off of who her husband is.

Melania Trump started modeling at 16yo. She studied Design and Photography in high school, and then went on to attend the University of Ljubljana.  This is considered one of the top 800 Universities in the world.  It is also the largest and oldest university in Slovenia.  She attended the University for one year before shifting her focus more towards her modeling career.
Melania speaks 6 different languages. (SIX!!) She modeled for magazine's and fashion houses in Milan, Italy and Paris, France before relocating to New York in 1996. She has been featured in Sports Illustrated's swimsuit issue and on the cover of several magazines including Harper's Bazaar, Allure, Vanity Fair and GQ.

Melania became a permenant resident in 2001, she married Donald Trump in 2005 and became a US Citizen in 2006.

She doesn't have an Ivy League education.  But she does have an incredible story.

I love Michelle Obama and I'm going to miss her being FLOTUS.  She's beautiful, classy and intelligent. I wish she would run for president herself. But I also welcome Melania Trump.

I think its a huge mistake, and a lost opportunity for designers to not dress the new First Lady, and I think its wrong.  Its crazy that in this coutry its okay to have a whole walk against slut-shaming, but God forbid a model who took some racey photos should become First Lady.