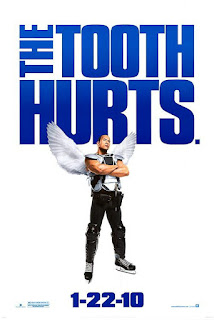 Family Movie Releases:
The Tooth Fairy - Official Synopsis – 01/22/2010
Dwayne Johnson is "The Tooth Fairy," also known as Derek Thompson, a hard-charging hockey player whose nickname comes from his habit of separating opposing players from their bicuspids. When Derek discourages a youngster's dreams, he's sentenced to one week's hard labor as a real tooth fairy, complete with the requisite tutu, wings and magic wand.

Alice in Wonderland - Official Synopsis – 03/05/2010
From Walt Disney Pictures and visionary director Tim Burton comes an epic 3D fantasy adventure, Alice in Wonderland, a magical and imaginative twist on some of the most beloved stories of all time. Johnny Depp stars as the Mad Hatter and Mia Wasikowska as 19-year-old Alice, who returns to the whimsical world she first encountered as a young girl

About Diary of a Wimpy Kid- 04/02/2010
The book Diary of a Wimpy Kid, by Jeff Kinney, is beloved among grade-school children all over. The story follows middle-schooler Greg Heffley, who relates his funny daily adventures in his illustrated diary. Greg's humorous observations about life in middle school will soon be adapted to the big screen.

Iron Man 2 - Official Synopsis - May 7, 2010
Paramount Pictures and Marvel Entertainment presents Iron Man 2, the world is aware that billionaire inventor Tony Stark (Robert Downey Jr.) is the armored Super Hero Iron Man. Under pressure from the government, the press and the public to share his technology with the military, Tony is unwilling to divulge the secrets behind the Iron Man armor because he fears the information will slip into the wrong hands.

Shrek Forever After - Official Synopsis 05/21/2010
Shrek a domesticated family man agrees to autograph pitch forks, but longing for the days when he felt like a "real ogre," he is duped into signing a pact with the smooth-talking dealmaker, Rumpelstiltskin. Shrek finds himself in a twisted, alternate version of Far Far Away, where ogres are hunted, Rumpelstiltskin is king and Shrek and Fiona have never met. Now, it’s up to Shrek to undo all he’s done in the hopes of saving his friends, restoring his world and reclaiming his one True Love.

Rapunzel Nov. or Dec. 2010
Mandy Moore will voice the title character in Walt Disney Pictures' Digital 3D-animated "Rapunzel," while "Chuck" star Zachary Levi has been cast as the voice of the bandit who finds himself on the road with the rebellious, teenage hair apparent. The movie picks up with the princess, famous for her 70 feet of golden hair, after she's been stolen from her parents' castle as an infant and imprisoned. Now a teenager, Rapunzel escapes and goes on the run with a bandit as her captor pursues them.

Television:
The Tyra Banks Show will end in Spring 2010
Lost will air its final show in March of 2010
Vampire Diaries starts its new season this month with a new episode airing 1/21/2010